You can quickly and easily add space for more PCIe cards to your Thunderbolt 3 computer with the help of this handy AKiTiO Node Duo Thunderbolt 3 PCIe Expansion Chassis. This highly portable expansion chassis offers enough space for two half-length PCIe cards, and can easily be transported to wherever you might need it. The additional PCIe card ports allow you to connect Thunderbolt 3 laptop PCs to all manner of motherboard components, such as graphics, memory, and storage, allowing you to upgrade your laptop with access to better hardware.

Each of the two PCIe slots providers 25W of power each. If you're only using one PCIe card and not using the power delivering function, the slot itself can offer up to 75w of power. As such, you can use the chassis to make sure your Thunderbolt 3 gets the power it needs and even use it to recharge your PC. The device can also be modified with an included 150W power adapter for any PCIe cards that might require more power, with instructions on how to upgrade the power supply provided.

When you have run out of internal space for PCIe card expansion, this chassis allows you to take care of your needs externally. It's also highly portable with a well-ventilated and easy-to-carry case, meaning you can take it with you wherever you take your laptop or connect it to a different laptop with ease.

The Node Duo, with space enough for two half-length PCIe cards, is the ultimate plug and play expansion kit for Thunderbolt 3 computers (e.g. laptop computers) where installing an internal expansion card is not an option and for systems where there is not enough space for more PCIe cards. The Thunderbolt 3 (USB-C) connection not only makes adding an external PCIe card easy but it also allows you to take the device with you to use on location and move it from one system to another.

Supports two PCIe Gen3 x2 cards
The two PCIe slots accept half-length, full-height, double-width cards and provide 25W of power each. If only one PCIe card is installed and the power delivery function is not used, the PCIe slot can provide up to 75W of power.

Upgradeable power supply
For PCIe cards that require more power, this device can be modified accordingly. For more power, the included 150W power adapter can be replaced with a bigger power adapter (min 230W), making it possible to provide up to 75W of power to each slot. For even more power, the breakaway tab on the back panel can be removed to create an opening, which can then be used to run a cable from an additional PSU like AKiTiO's 500W SFX PSU directly to the PCIe card (e.g. 6+2-pin PCIe power cable).

Power Delivery (60W)
The reversible USB Type-C (USB-C) connector enhances ease of use for connecting devices with a focus on minimizing user confusion for plug and cable orientation. The Node Duo also supports power delivery (PD) over USB-C, providing up to 3A at 5V, 9V, 15V, 20V with a maximum of 60W of power to compatible laptops like the MacBook Pro (late 2016) that support charging through the USB-C cable or for devices like the iPad Pro. This allows you to recharge your battery even though the laptop is not plugged into any other power source.

Thunderbolt™ 3
Thunderbolt 3 brings Thunderbolt to USB-C at speeds up to 40 Gbps, creating one compact port that does it all - delivering the fastest, most versatile connection to any dock, display, or data device. For the first time, one computer port connects to Thunderbolt devices, every display, and billions of USB devices. A single cable now provides four times the data and twice the video bandwidth of any other cable, while also supplying power to bus-powered devices.

The Node Duo has two Thunderbolt 3 ports. The second port operates the same as a Thunderbolt 3 computer port by supporting Thunderbolt 3 (up to 5 daisy-chained), USB 3.1 (10 Gbps), and DisplayPort devices.

DisplayPort
The dedicated DisplayPort connector makes it easy to connect an additional monitor to extend your workspace. This video output capability requires a Thunderbolt 3 connection to the computer and will free up the second Thunderbolt 3 port for Thunderbolt 3 (up to 5 daisy-chained), USB 3.1 (10 Gbps), and DisplayPort devices. 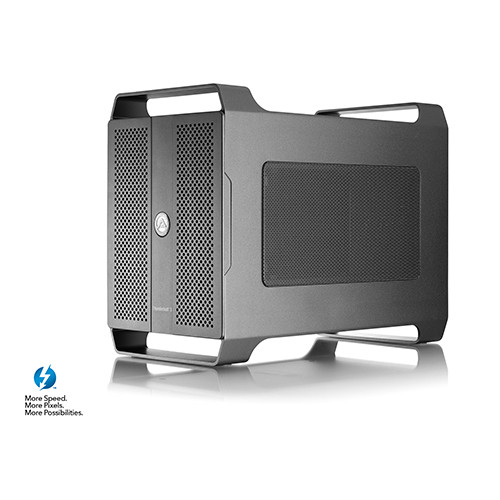