Meet The Fastest SSD Available
When OWC launched its first Solid State Drive in 2010, it was engineered to deliver the same attribute formula that Mac and PC users expected from OWC external storage solutions:

All those “ingredients” combine to deliver over 6,000MB/s real-world speed with the highest reliability possible to satisfy the biggest storage performance appetite.

Highly Versatile with Mobile Possibilities
Whether you have the Mac Pro 2019, a Mac Pro 2012 or 2010, or PC tower, Accelsior 4M2 can go to work for you. As a half-length x8/x16 compatible card, this game-changer offers the versatility you need, so you’re not tied to one PCIe slot size or limited by a space-confined computer case.
You can also enjoy the performance-boosting benefits of Accelsior 4M2 with your Thunderbolt 3-equipped notebook computer, iMac workstation, or slot filled gaming rig. It’s Plug and Play easy with a PCIe expansion chassis like the OWC Mercury Helios 3S (sold separately and coming soon).

Change Your Reality
Accelsior 4M2 offers performance gains in so many diverse ways that it will change the reality of how you use a storage solution:
Stream and edit high-res video and graphics files without a glitch.
Experience faster previews, renders, and processing in VFX programs.
Keep page scenery and textures looking sharp and flowing uninterrupted in virtual reality environments.
Ensure augmented reality visualizations look life-like.
Change game levels seamlessly and play flight/driving/MMO games with continuously changing scenery and heavily personal preference modded games without micro-stuttering.
Give your computer a significant speed boost with the improved system “snappiness”, a fast OS boot drive, or a bottleneck-free scratch drive.

Includes SoftRAID: Easy and Complete Drive Management
Accelsior 4M2 includes SoftRAID software to help you manage your data like a pro. You can maximize drive space, get the fastest access speeds, and protect against drive failure with plug-and-play simplicity. SoftRAID’s easy setup makes it a breeze to create RAID volumes by helping you through the entire process. Just decide what you’re using your RAID volume for and how much space to allocate to it. It's that simple to create your preference of speed and/or redundancy attributes of your data volume. 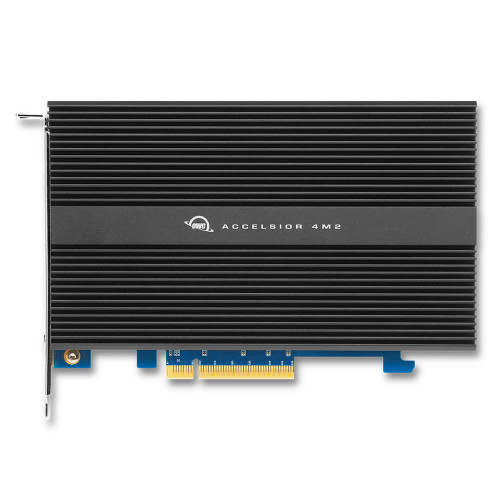