Fast
Feather swiftly outpaces Apple drives and blows the competition away, reaching speeds up to 100% faster than Apple OEM.

Innovative
Feather P12 utilizes the latest in mSATA technology, brought to you at the most affordable prices on the market.

Effortless
The feather was designed to be installed exactly like an Apple SSD. Simply open up your MacBook, plugin, and play. Of course, if you've got questions, we have full-time support staff standing by. Feather SSD is a revolutionary internal solid-state drive upgrade for Mac computers. Feather is fast, affordable, and backed by an amazing support team and 5-year warranty*.

The Feather P12 is the fastest late 2012 to early 2013 MacBook Pro and iMac compatible SSD available on the market. It features the SATA III interface, reaching peak sustainable read and write speeds of 530/500MB per second, significantly outpacing the competition’s solid-state drives.

Not for use with Late 2013 MacBook Pro with Retina Display with model ID: MacBookPro11,x 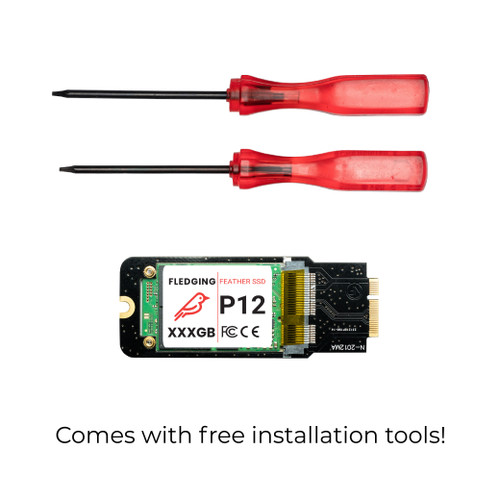