Keep On Innovating
Tight deadlines, long nights, and terabytes of media – your Mac has been with you through it all. If storage is tight, there's no reason to ditch the Mac you know and love. The Aura® Pro X2 SSD gives you up to 16 times more space and the speed to keep up with your imagination today and tomorrow. Upgrade your Mac with Aura Pro X2 SSD for a fraction of the cost of a new model and keep your Mac running for years.

Maintain Your Edge
When it's go time, getting off the line and maintaining a high level of performance are equally important. Aura Pro X2 is engineered with advanced SLC caching, providing instant full-speed write acceleration, meaning those media projects and games stream fluidly and respond without lag time. You might even forget what that beachball looks like.

Blazing Fast and Super Cool
Aura Pro X2 combines speed, stamina, and efficiency that will change the way you experience your Mac. With read speeds reaching 3282MB/s and write speeds of 2432MB/s, the 480GB Aura Pro X2 is up to twice as fast as the original SSDs, delivering performance on par with the latest models. It runs cooler and consumes less power than earlier SSD models, so you can run at peak for longer than ever.

Right-Sized for Work and Play
The smaller stock SSDs for Mac can fill up quickly, especially with photo and video files, games, or even your email. Aura Pro X2 SSDs are available in capacities up to 2TB, giving you more space to work and play. Newly calibrated to use less power and run cooler, Aura Pro X2 is the best way to upgrade your PCIe equipped Mac.

No Hassles or Hacks Compatibility
Aura Pro X2 PCIe-based flash storage upgrades are precisely engineered for your Mac laptop, so you'll never need to compromise your data by relying on complicated software hacks or TRIM-enablers to get the most from your upgrade. Just install, migrate your data, and enjoy the great performance of flash storage with up to 16 times the capacity of the factory-installed drive.

Quality That Lasts
Aura Pro X2 SSDs are proudly designed in Austin and are backed by a lifetime of free, award-winning USA-based support.

What is in the box: 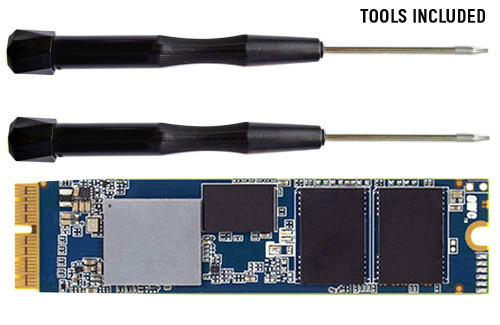