The latest news on the XP941 is that it is fully compatible and bootable in all new Intel X99-chipset motherboards, and with most previous generation Z97-chipset based motherboards, such as the ASRock Z97 Extreme6 (no adapter required). To get the XP941 working in the ASUS Z97 Pro motherboard, see these excellent instructions. When combined with a M.2 to PCIe adapter, the Samsung XP941 provides class-leading storage performance in desktop machines and is also fully bootable in all cMP Mac Pro models (2006-2012, excluding the 'tube' model). See the table at the bottom of this page for approximate throughput figures.

Do not run Parted Magic's secure erase on this drive. It will render it useless and void the warranty.

If you intend to purchase this product as an upgrade for an existing smaller drive in a laptop, you should check if the existing drive is a Samsung XP941 or other M.2 PCIe SSD. If you intend to purchase this drive for installation in a desktop PC (with or without an M.2 socket), then please review this post or feel free to contact us via chat, email or phone (see top of our website for details).

XP941 SSD's with first generation firmware were reported to have some issues, where if the Mac Pro is put to sleep for longer than 7 hours, then the restore from sleep mode did not work properly, and a hard reset was required to restore the system. Restoring from sleep for shorter periods of time worked fine. This issue does not occur in the 4-lane PCIe slots, and it's recommended that you install your XP941 and PCIe adapter there if you use the deep sleep function. **The currently shipping product has a newer generation firmware and lab testing has so far showed no issues with extended sleep and restore testing.**

** From the review at barefeats.com: "Using the 'Expansion Slot Utility' in the System/Library/CoreServices folder, we reconfigured the PCIe slot speeds to various combinations of 4, 8, and 16 lane slots to benchmark the XP941. The transfer speeds above were achieved using the 4 lane slots. The 8 lane and 16 lane slots did not produce any faster transfer speeds. On other other hand, if you use a 1 lane slot, the transfer speeds drop to 200MB/s READ and 170MB/s WRITE. We tested with both OS X Leopard and Snow Leopard. OS X Tiger kernel panicked at startup. Though we didn't try it, it should also work with OS X Lion, the last Mac OS to be officially supported on the 2006 Mac Pro."

*** To achieve the listed throughput rates on a PC/Workstations/Server platform, a PCIe 2.0 x4 or higher slot is required (e.g. PCIe 2.0 x8 or PCIe 2.0 x16). PCIe 1.0 slots may provide lower performance, depending on the number of PCIe lanes allocated to the slot.

If you are planning to upgrade your system with a larger M.2 SSD, you should be aware that some models are SATA based, and some are PCIe based. In the smaller capacities (128GB and under), the M.2 SATA 2242 is more common. In larger capacities, due to the additional surface area needed to fit more NAND chips, the M.2 SATA 2280 or M.2 PCIe 2280 drives are the norm.

It's all about the keys

A 'key' defines both the socket (female) and the plug-in card connector (male). In the context of an M.2 SSD, the key prevents the insertion of a connector into an incompatible socket to ensure the proper mating of the two. Currently the M.2 specification for SSDs uses just 2 out of 11 defined key configurations, with seven for use sometime in the future, and 2 used for other devices such as WLAN and Bluetooth adapters like the Intel 7260NGW wireless adapter.

An M.2 SSD socket can only have one type of key, but an M.2 SSD drive can have keyways cut for multiple keys if it supports those socket types. Key ID B (pins 12-19) gives PCIe SSDs up to two lanes (PCIe x2) of connectivity and key ID M (pins 59-66) provides PCIe SSDs with up to four lanes (PCIe x4) of connectivity and correspondingly higher performance. Note also that both B and M keys can accommodate SATA devices. All of the key patterns are different from one another so that the card has to be the right way up and cannot be inserted incorrectly.

Not all keys are the same

The rest of the information here will help you identify the type of M.2 key deployed in your system. However, since 'B' and 'M' type keys can support either PCIe or SATA signalling, knowing the key alone is not sufficient information to determine the correct M.2 SSD upgrade path for your system. You'll need to carefully study your system specifications manual to see if the socket is SATA or PCIe. Fortunately the limited number of M.2 SSD drives available does narrow the choices down somewhat. Further down we also have a list of known systems and the associated compatible M.2 SSD type it needs.

The table below shows the different types of M.2 SSD sockets found in M.2 compatible systems and motherboards: 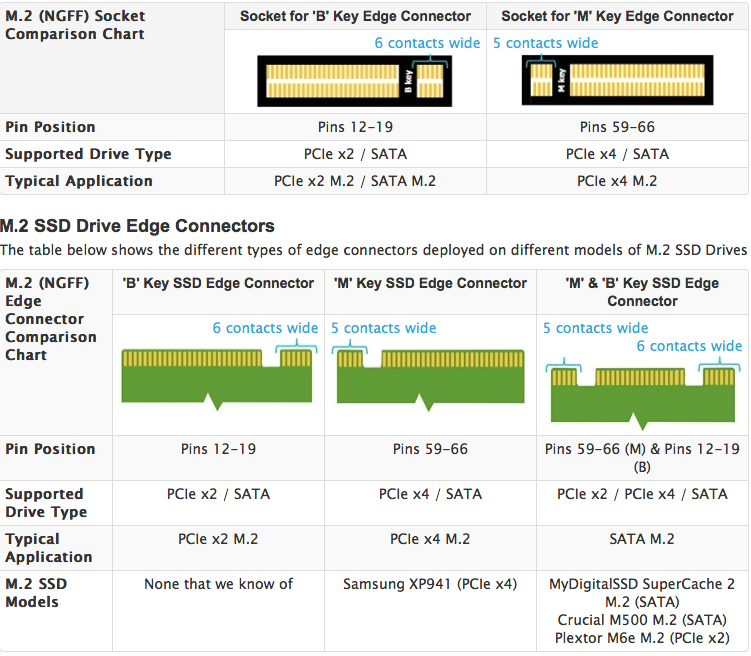 If you are planning to upgrade your system with a larger M.2 SSD, you are going to need to figure out several things:

Using the above tables and your system manual, you should be able to figure out which kind of drive you have now and the appropriate upgrade path. Based on our experience though, as of March 2014 we can help narrow it down for you.

Spotting the difference between M.2 PCIe and M.2 SATA

So, how do you tell the difference between an M.2 SATA and M.2 PCIe SSD drive? It all depends on the number of notches (keys) on the end of the drive (the end with the edge connector which goes into the M.2 socket).

Before purchasing an M.2 SSD, you should also check the length of the existing drive, as not all are created equal. The MyDigitalSSD SC2 128GB M.2 SATA SSD is a '2242' drive, so it's 22mm wide, and 42mm long. That's the maximum length that M.2-capable motherboards like the ASUS Maximus Extreme VI can handle, and it fits a lot of laptops/netbooks as well. SATA based M.2 drives can also be installed in any desktop machine with a free PCIe slot using adapter.

The Samsung XP941 PCIe M.2 SSD, apart from being PCIe based, is a '2280' drive, so it's 22mm wide, but 80mm long. Currently it's only supported natively (and bootable) in certain specific models of the Sony Vaio Pro 13, or you can install it in any desktop with a free PCIe slot using M2P4S M.2 (NGFF) PCIe base SSD to PCIe X4 Adapter ( here) (booting is not supported in desktops currently, however).

** there are two models of this machine, and the end user should check their system specifications to ensure that the machine uses a PCIe SSD, or otherwise inspect the existing SSD to ensure it is a Samsung XP941 model.

The following is a list of some of the most popular M.2 compatible models being used today. Please add your questions and comments at the bottom of the page and help us grow and maintain this list.

* Some Lenovo IdeaPad models may ship without an M.2 connector, please check that your device has an M.2 connection before placing your order.

** Check your existing M.2 drive in the Sony Vaio Pro. If it's a Samsung XP941 model, then you have a PCIe based M.2 drive. See the picture at the top of the page for further information about PCIe vs SATA based M.2 SSD's.